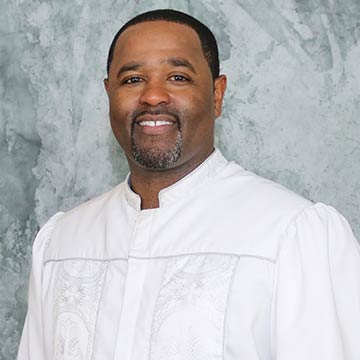 Charles B. Jackson, Jr. was born and raised in Columbia, South Carolina to Mrs. Robin and Reverend, Dr. Charles B. Jackson, Sr. He is a dedicated family man and devoted father of four: Kayla Mckenzie Jackson; Charles, III (Affectionately called, Tre`), Caleb and Carter. They are his main meaning and motivation in life. From very humble upbringings, Reverend Jackson matriculated through the Richland District One School System, graduating with honors from A.C. Flora High School. He is a 2000 Cum Laude graduate of South Carolina State University, where he participated in several college activities, including the SCSU Concert Choir, Student Government Association, and Men's Basketball Team; along with pledging Kappa Alpha Psi Fraternity, Incorporated and Alpha Kappa Psi Professional Business Fraternity.

Reverend Jackson continued his education at the Morehouse School of Religion on the campus of the ITC in Atlanta, Georgia, where He graduated with Honors and earned the Master of Divinity degree with a concentration in Homiletics. He is a Fall 2002 inductee into the Theta Phi National Honor Society for Seminary Students, and is currently pursuing the Doctor of Ministry degree. He was presented the Memphis Award for Academic Excellence and nominated as one of the Nation's Top 40 Seminarians to appear in The African American Pulpit Magazine. Reverend Jackson received his license to preach the Gospel on September 23, 2001, at the age of 21, and was officially ordained into the ministry on August 14, 2002. He is presently the happy and humble pastor of the New Laurel Street Missionary Baptist Church, Columbia, South Carolina, and also serves as Executive Pastor of the Brookland Baptist Church, where his father is the Senior Pastor. He has held several offices in the local Gethsemane Baptist Association, including Congress Dean and President; and has served on the National level in many capacities, including President of the South Carolina Fellowship of the Progressive National Baptist Convention. He has humbly served on several boards and community organizations, including the United Way Board of Directors, Blythewood High School Improvement Council, South Carolina State University Board of Visitors, and is Clinically Certified by Palmetto Health. He also currently serves as Spiritual Advisor and Chaplain for the University of South Carolina Football team.

Reverend Jackson's favorite quote and firm conviction is "Everybody can be Great, because Everybody can Serve." He believes that his God-given mission for ministry is to "love, liberate and lift up all of God's people by leading them to Christ and living the truth of the Gospel." He is constantly encouraged by his most empowering passage of Scripture: Philippians 1:6, "...being confident of this, that He who began a good work in you will carry it on to completion...!"